What is the difference between vector and bitmap files, and why is this important for my projects?

Vectors and bitmaps are the two most widely used formats used for displaying and creating graphic images on a computer. Both formats are used extensively in the sign and graphics industry (as well as others), with each having their own distinct characteristics, purposes, and limitations. 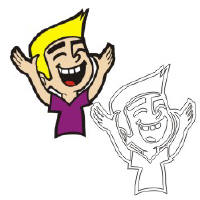 Vectors are best compared to a dot-to-dot coloring book. By connecting a series of points (nodes) in a closed pattern, you can create a shape. For instance, a square would have four equally spaced points connected by four lines around the perimeter. When a “closed” path is created, whereas there are no open spaces in the dot-to-dot connection, the interior can be filled with a color to create a filled design. Combining a series of shapes filled with differing colors creates a graphic (picture). One major benefit to using vector graphics is that it can be scaled infinitely without distortion. Well designed vector graphics will look great whether its printed on a writing pen or a billboard.

To create a sign using vinyl, we need the lettering, logos, or other graphics to be in a vector format. Computerized cutters called plotters use an intricate knife to follow the outside perimeter of the vector to produce the detailed vinyl sections needed to construct a sign. Vectors can easily be resized larger or smaller without losing quality. It is also possible to manipulate the individual points of a vector graphic to change its appearance without distorting the overall appearance of the picture.

Popular vector-based design programs include Adobe Illustrator, Corel Draw and Inkscape. The file extensions for some of the more popular vector files are .ai, .pdf, .eps, .cdr, and .svg (note that some of these files may also contain bitmaps or raster images if they were included in the drawing, but in their native format, these are vector files). Note: just because you save an image as on of these formats (for example saving a picture as a .pdf) does not make it a vector graphic. Many people make this mistake and pass it off to their designer expecting it to work. It doesn’t and your designer is not amused. 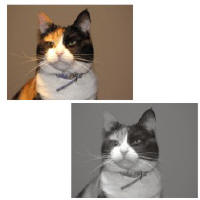 Bitmap or raster images are best compared to a photograph (which they usually are). To produce a bitmap, the computer uses a series of dots (pixels) of varying colors placed side-by-side. When there is a large enough series of dots, a visible image is produced. Increasing the number of dots will increase the size and quality of an image (and increase the size of the resulting computer file as well). Bitmaps do not work for vinyl cut signs because there is no outside path for the cutter to follow. If we are going to use a bitmap to produce a vinyl sign, we first have to trace the image to create a vector path. Tracing a bitmap can take a lot of work to “clean up” the resulting file so that it will look good on the final project.

With our digital printing capabilities, we are able to print bitmap or raster images on vinyl that can then be applied to various materials (vectors can also be printed). For a quality reproduction, an original image in high resolution is needed (with a lot of pixels). Small images can be stretched to a larger size, but the quality is lost and the image will appear fuzzy (since enlarging only makes the pixels larger, it does not add new pixels to the stretched image). The use of bitmaps and raster images on signs has vastly expanded what can be included on the finished project. No longer are you limited to varying layers of vinyl to produce a finished image. Bitmaps/raster images come in various formats, as well, with the most popular being .jpg, .bmp, .png and .tiff. and are widely used on the internet. These images are usually compressed for quick loading times.

Generally speaking, vectors are preferred for logos, lettering, and other basic designs. Bitmaps are best for pictures, detailed drawings, or complex logos (with shading, etc.). The Sign Pro design staff can assist you in determining what formats will work best for your project.

Drop us a line today and allow our talented designers to guide you.